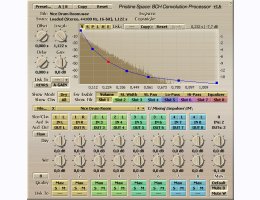 Pristine Space is a native audio VST plugin which allows you to use convolution reverb impulses in your audio projects.

Pristine Space was mainly created for impulse reverb perfectionists: it does not implement various `combo' approaches which try to save CPU cycles by creating a synthetic reverb tail instead of performing a full convolution. Because such approaches in many cases give unsatisfactory results if you expect them to sound exactly like your original reverb impulse sounds, we have decided not to use them. Instead, we have optimized to the maximum both the efficiency of convolution processing and the plug-in's latency.