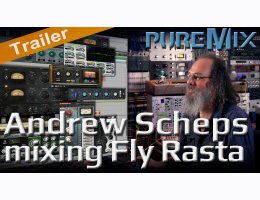 Andrew Scheps Mixing a song by Ziggy Marley in the Box

Andrew Scheps is one of the top mixing engineers in the world today. He earned his stripes - and Grammys - by mixing hit records for everyone from Adèle to The Red Hot Chilli Peppers, Jay-Z to Michael Jackson. For this video, Andrew was kind enough to let pureMix.net observe his in-the-box process while he recreated his mix of the song 'Fly Rasta' by the amazing Ziggy Marley from the eponymous album 'Fly Rasta' on Tuff Gong records.

In this 2+ hour master class, Andrew Scheps mixes the very same Pro Tools session he mixed for the actual released record, and leads us through to a final mix, all with readily available plugins, explaining every move and every decision, and leaving no stones unturned. If you ever wondered what tricks and techniques are required to make records that sound that great, this course is what you have been waiting for.

This is a major mixing engineer mixing a major song for a major artist on a major label, right in front of your eyes, with full transparency. You will get to download the truncated stems of all the tracks and mix along with Andrew in your own DAW, with your own system and with your own plug-ins.

Only available on pureMix.net