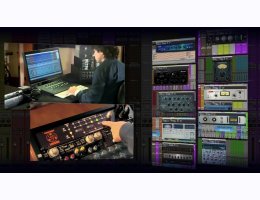 Mixing the song Words to Say in Pro Tools

The mixing of the modern pop Song 'Words to Say'

You may have seen producer Fab Dupont and the South African band The Arrows take the song ‘Words to Say’ from demo track to a mix-ready session in the free 6 part video series called 'From Creation to Mix'. In this 80 minute video,

'Words To Say' is a great example of modern pop production with a mix of acoustic and electronic drums, layered synths and guitars tracks and lots of cool production moves.

Since this is an enormous session, instead of starting the mix from scratch, Fab deconstructs the existing mix that made it on the final record. Instrument by instrument and track by track, he describes every setting, explains the thought process behind every decision and shares all the tips and tricks he used to make this song sound huge.

This mix was performed with 95% plugins except for analog summing and some limited analog 2-Bus processing.

This is a great opportunity to see how the pros manage a big session and what goes into mixing a major label release.

00:01:18 by PureMix Dec 20, 2014
In this video, Fab Dupont analyses his modern and punchy mix of the song 'Words to Say' by The Arrows in Pro Tools. He teaches us how to mix songs by deconstructing this song and his uses of...