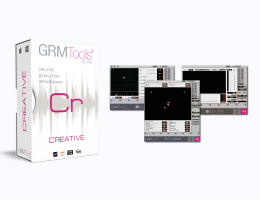 INA-GRM have handpicked a collection of some of their famous plug-ins (below), that can be used in a musical context specifically for mix engineers and sound designers, DJ’s, etc.

If you’ve never had the chance to work with these plug-ins in your field, you’ll be inspired for sure! The plug-ins contained in this bundle have previously been used mostly for post-production film works, but these have been handed picked for you... The Creative Bundle!

Delays (part of the Classic Bundle)

This plug-in lets you create and control any type of delay line from echo to reverberation to phase shift, soften instrumental attacks, create a wide variety of special effects...

Delays consist of a set of delays which are variable from 0 to 6 seconds. Depending on the power of the processor, it is possible to have up to 128 simultaneous delays, whose amplitude and position are controlled. In the stereo version, the delays are assigned alternately to the left hand and right hand channels.

Evolution is used to obtain continuous evolution of timbre by frequential sampling of the input signal.

The timbre of the input signal is sampled at more or less regular intervals. The output signal is obtained by interpolation between the sampled timbres.

Evolution can turn any audio signal into astonishing textures or subtle smoothing effects. Just experiment by yourself using the downloadable demo version and get surprising results!

SpaceGrain enables the generation of up to 100 ‘ grains’ and their placing in a multi-channel sound space.. This gives you 100 points where your sounds are randomly assigned from point to point. Each grain provides a mono site for the sources to be heard. The input channels (up to 8) are randomly allocated to the grains. You can add delay and feedback to create extremely creative effects.