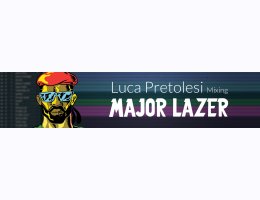 See How A Worldwide Hit Gets Mixed

Luca is Major Lazer’s "Finisher" and helps Diplo and his team combine multiple sessions into one sonic masterpiece.

Learn Luca’s hybrid workflow and see how he takes a great static mix, applies stereo bus processing and then digs into the details it takes to create a hit-sounding EDM record.

Luca teaches you his tips and tricks for mixing modern electronic/pop music including:

- Mixing with the final master in mind
- Create a present midrange on a dense mix
- Analog and digital stem mixing process using analog EQ, compression and summing
- Add thickness and a more organic sound to electronic ITB productions
- Removing reverb from a synth stem
- Add top-end clarity and mid-range punch heard on every modern pop and EDM mix
- Sidechain filtering for a focused bus compression
- Multiband stereo image processing to open up the top end with the perfect amount of dimension
- Automating the master bus for maximum impact on the drop

Hear countless before and after comparisons to learn the sound and attitude that’s required to create a killer mix.

When it comes to mixing EDM there are no rules and now is your chance to see how Grammy nominated mixing/mastering engineer Luca Pretolesi breaks the rules and delivers a slamming sounding mix!