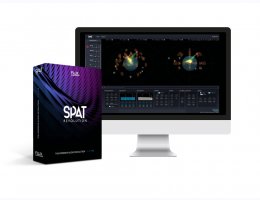 The Audio industry is undergoing a profound evolution and Flux:: Spat Revolution is here to tackle it.

Total immersion is the future of the gaming and entertainment industries. Augmented reality is no longer an abstract notion, it is now dramatically affecting how we work, play, travel, and communicate, as data is being converted to construct a totally immersive environment.

It provides a complete toolset for artists, sound-designers and sound-engineers allowing total control of the position of audio-sources in a three-dimensional environment, adding further spacial effects, and finally sending the result to any loudspeaker setup or just a pair of normal stereophonic headphones.

SPAT Revolution was created for audio professionals and designed to easily integrate into any workflow. With features such as its flexible modular concept, a unique capability to specify and automate the spatialisation parameters completely independent of the output format, support for different types of both hardware and software inputs/outputs, as well as network support for both audio and automation, it offers endless possibilities while remaining simple to use and ergonomically friendly .

It’s an efficient and creative working environment for the user. Its originality also lies in its way of controlling the room effect using perceptual criteria that allows the operator to intuitively specify the sound characteristics of the space he needs to create.

The sound quality is of paramount importance in the SPAT Revolution. It has been built using the best algorithms from years of research at the Acoustic and Cognitive research department at the French research institute IRCAM (Institut de Recherche et Coordination Acoustique/Musique), as well as those developed by Flux :: sound and picture development over the past 10 years.

A powerful and innovative framework developed by Flux :: enables it to combine optimal performance and flexible scalability as well as complete compatibility on Mac OSX and Windows. (Linux version coming soon)

SPAT Revolution mixes, reverberates and spatialises audio material from all kinds of sources such as, microphone arrays/trees, spot microphones, Ambisonic captions at higher orders, as well as any type of pre-produced stems with any number of channels (Stereo, QUAD, 5.1, 7.1, Atmos, Auro 3D, etc). It utilizes standard hardware audio interfaces and also supports all major DAWs and their formats (AAX, AU, VST).