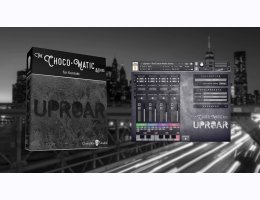 The first release in The Choco-Matic Series features the sound of a one-of-a-kind wonder guitar: a Custom Shop ESP 8-string baritone guitar specially made for Gianluca Ferro.

Two of the most powerful active EMG pickups were paired with boutique amps, effects and custom re-amping to achieve a thunderous guitar tone, tailored to cut its way through busy mixes in any genre: cinematic, orchestral and modern rock music in particular.

Gianluca Ferro is a very accomplished guitar player and does ESP endorsements. Having played in numerous international metal acts, knows quite a bit about the tone and attitude required to achieve perfectly tight and soulful tracks.

The Exclusive Choco-Matic Engine is not your common "play a phrase at a time" engine. Chocolate Audio built this engine making use of their expertise as sample library producers since 2003 and their knowledge as users of such phrase-based instruments.

This product make use of their unique feature 'Sync/Legato'. Chocolate Audio have always wondered why triggering a phrase and then another doesn't simply make the first phrase flow effortlessly into the second one, rather than re-triggering the whole thing from the start in a rather un-musical way and vastly limiting the expressive possibilities offered by such phrases. So, they took care of it.

The same logic applies also to the switching of Tonal Centers (harmonic contexts), allowing you to create custom harmonic progressions and/or riffs starting from the same Phrases, thus achieving almost endless creative possibilities for each release in The Choco-Matic Series.

An exclusive feature of the Version 2 engine is the ability to anticipate or delay each single part by the desired amount in musical time. 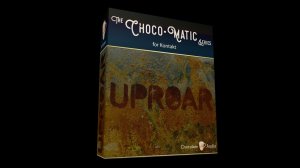 00:16:55 by Chocolate Audio Jun 25, 2016
Browsing and playing through the many different Collections, Parts and Phrases of the first release in The Choco•Matic Series - UPROAR.