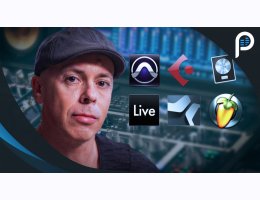 Start building your own mixing system based on Luca's workflow

Learn how multi-platinum mixing/mastering engineer Luca Pretolesi organizes and routes every mix and master that he works on at Studio DMI in Las Vegas, Nevada.

Luca walks you through his hybrid mixing setup, explaining his bussing system and session organization and then shows you how he utilizes analog processing and summing to deliver incredibly consistent and loud mixes and masters for his clients.

Using a variety of gear and a fine tuned mixing system that he’s developed over years of experience is the key to Luca’s signature EDM sound that you can hear on records by Major Lazer, Borgeous, Gareth Emery, Snoop Lion, Steve Aoki and more.

Of course not everyone has access to the same analog gear and summing setup so in this tutorial, Luca teaches you how he adapts his hybrid mixing system to go entirely in the box (ITB) without sacrificing the overall workflow or sound of his mixing process.

The best part is that you also get to download Luca’s mixing templates that have been carefully translated into:

Get organized and learn how to develop your own mixing system to set yourself up for successful mixes every time based on Luca’s unique mixing workflow.