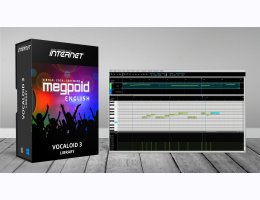 Megpoid English is the virtual vocal software based on the voice of Megumi Nakajima who is a famous Japanese singer and voice actress.

Just enter the melody and lyrics, and hear Megumi sing your song! It really is that simple, and can be used for any song. Her voice is clear and relaxed, and retain its quality when applied to any tempo. Using Megpoid allows you to create any song with a wide range of parameters, to produce a new female vocal sound.

The simplified application (Tiny VOCALOID3 Editor for Windows) is provided for the purpose of test operations. However we strongly recommend you use "VOCALOID Editor" series in order to create full-fledged songs.

Vocaloid is a technology for singing voice synthesis developed by Yamaha, and the name of this software application. The software allows users to input melody and lyrics in order to synthesize singing. In other words, with this technology, singing can be produced without a singer. Singing voice synthesis is produced by using fragments of voices recorded from actual singers, called the Singer Library.