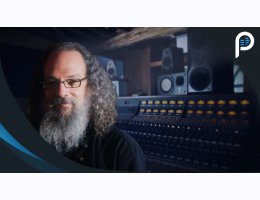 The Neve 8068 MkII is one of the most highly regarded consoles in music history. Its sound can be heard on multiple records and its feature set has helped engineers and artists create timeless classics.

In this pureMix.net Exclusive, Grammy Award Winning Engineer, Andrew Scheps goes over the feature set of his 64 channel Neve 8068 MkII, originally from his Los Angeles based studio, Punkerpad West, that now resides in the stunning Monnow Valley Studio in Wales.

Learn the ins and outs of the Neve 8068 MkII console as Andrew explains the signal flow, eq section, routing, and bussing as well as the role this console played in the development of his Rear Bus mixing technique.

You can see this console in action in Andrew’s pureMix tutorial: “Andrew Scheps Mixing Ziggy Marley All Analog”

Discover the venerable Neve 8068 MkII Console from Andrew Scheps, only on pureMix.net

Andrew Scheps is a music producer, mixing engineer and record label owner based in the United Kingdom. He has received Grammy Awards for Best Rock Album for his work on Red Hot Chili Peppers' Stadium Arcadium, Album Of The Year for Adele's 21, and also Best Reggae Album for Ziggy Marley's Fly Rasta.

Andrew started as a musician, but found that what he enjoyed most was working behind the scenes. This led him to study recording at the University of Miami. After graduating, he spent some time working for Synclavier, and then on the road with Stevie Wonder (as a keyboard tech) and Michael Jackson (mixing live sound). But he found his home in the studio, and he honed his craft working for producers such as Rob Cavallo, Don Was and Rick Rubin.

Andrew collaborated with Waves in order to create his own line of plug-ins which include the Scheps 73 EQ and the Scheps Parallel Particles.

Andrew is one of the best known mixing engineers in the world, well-known for his Rear Bus mixing techniques that he developed working on his 64 input Neve 8068 console and his love for distortion of any kind. If you are watching pureMix videos you will see that he managed to carry his analog sound signature over to a fully portable digital rig. These days, Andrew mixes completely In The Box as it allows him much greater flexibility and the ability to work on several project simultaneously.

Andrew has collaborated with Waves in creating his own line of plug-ins which include the Scheps Omni Channel, Scheps 73 EQ and Scheps Parallel Particles.