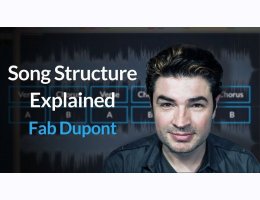 Learn The Fundamentals Of Song Structure

Determining a song’s structure is like unlocking the roadmap for where to go with performance, arrangement, mix ideas and more. It can help you communicate with the artist, fellow band mates, and make production decisions.

In this pureMix.net exclusive, multi-award winning engineer Fab Dupont explains several types of song structures as well as his process for identifying the different structures.

Fab will analyze over 30 songs with you and explain:

Once Fab has explained how he analyzes song structure, you will take a quiz to identify the form of Amy Reagan’s song “Crazy”.

Discover one of the most important elements of music, Song Structure, with Fab Dupont.