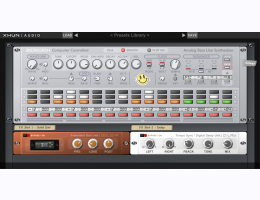 ZeroBox is an accurate analogue modeling simulation of a legendary, iconic, sequencer-driven bassline synthesizer that defined an era.

In addition to a meticulous replica of both the signal path and the physics of each of the electronic components found inside the original device (oscillator, filters, envelopes, etc.), an extended set of features, improvements and circuit-bents have been added, bringing the whole synthesis engine a step ahead.

Last but not least, a redesigned sequencer front-end and the inclusion of a full set of modulation, analogue saturation and multi-type distortion effects units make ZeroBox an expressive, powerful, self-contained tool for use in any electronic music scenario.

ZeroBox mimics not just the behaviour and physics of all the electronic components and the signal path, but also the miriad of quirks and idiosyncrasies found on the original hardware.

From the peculiarly shaped analogue oscillator's waveforms to the iconic 4-pole diode ladder analogue filter, from the biased envelope generators to the so-called gimmick circuit, everything is faithfully preserved in ZeroBox - including the uncommon interlinks and interactions between the different components.

The embedded digitally controlled sequencer is also modeled preserving the same vintage back-end logic and sub-pulse clock divisions of the original gear, while having the full benefit of a refreshed front-end with many easily accessible function improvements (triplets, shuffle, etc...).

ZeroBox can be used in conjunction with its embedded sequencer as well as with external sequencers, or as a single-oscillator monophonic solo synthesizer with a very bold sound and an incredibly deep low-end.