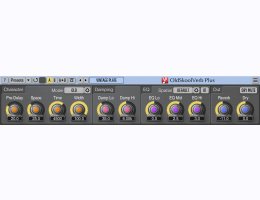 OldSkoolVerb Plus is an algorithmic reverberation plug-in for professional music production applications. This plug-in is an extended version of freeware OldSkoolVerb plug-in.

This plug-in implements a kind of “classic” stereo reverb algorithm which is technically simple yet optimal. It produces a very clear spatial image that blends well with the mix.