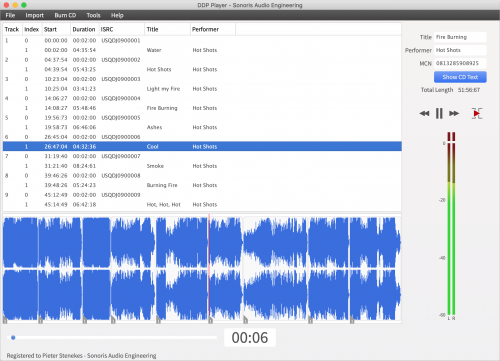 The DDP Player can import (loadback) a DDP 2.00 fileset made by any software, like Bias Peak Studio (XT), Sonic Studio HD, SADiE, Sequoia or Pyramix. You can playback tracks, audition gaps, see all PQ codes, ISRC, MCN and CD-Text data. Another feature is the Check Project function that tests the imported project against a set of RedBook specification rules.

Besides audio data a CD can also hold computer data like images, videos, songtexts or even program files. A CD with additional data is called an Enhanced CD. It is possible to add data in the space before the first track or as a separate data session on the CD. The DDP Player supports the extra session as this is the most common and compatible format. When an Enhanced CD is played back in a normal CD player it will play just like any other audio CD. But when this CD is opened on a Windows PC or Mac it will show the data session as an extra drive.