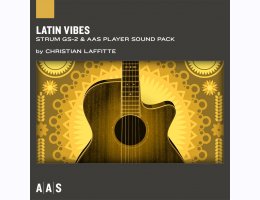 Applied Acoustics Systems releases the Latin Vibes sound pack for the Strum GS-2 and AAS Player plug-ins in collaboration with sound designer Christian Laffitte. Latin Vibes is the second of a new and growing line of sound packs for Strum GS-2.

Latin Vibes explores the world of traditional and modern Latin music with an excellent sense of groove and sensuality. This sound pack features many styles such as Bossa Nova, Reggaeton, Brazilian, Kompa, Flamenco, Bachata, and more. With its 12 styles, 81 guitar presets, and 84 strumming patterns playable with your own chord progressions, Latin Vibes will become a go-to source for your Latin guitar needs.

Who is Christian Laffitte?

Christian Laffitte is a French musician and sound designer based in the south of France. He has been developing sounds for Dream, Arturia, Zoom, Applied Acoustics Systems, M-Audio, Avid to name a few. He also composed music for Sony video games trailers and music for French TV channels and radio stations. As a keyboard player with a great interest in synthesis and new technologies, Christian Laffitte has put all his passion for music and sounds in creating Wejaam: a free music sequencer for smartphones and tablets.