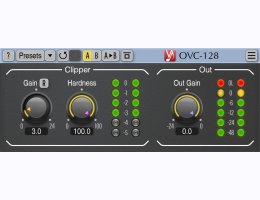 A common use for this plug-in is hard-clipping before the final peak limiter. This is an effective approach in contemporary electronic music when loudness is boosted using a clipper plug-in while minor excessive peaks are absorbed by a final peak limiter that applies no additional gain itself.

A perfect combination for contemporary electronic music production is OVC-128 followed by Voxengo Elephant mastering limiter in EL-C mode. This combination produces both energy and smoothness.

Note that OVC-128 is a relatively CPU-demanding effect plug-in, it requires a higher-end processor for comfortable use. Performing 128X-oversampled clipping on a single stereo track is computationally similar to performing simple clipping on 1000 tracks.