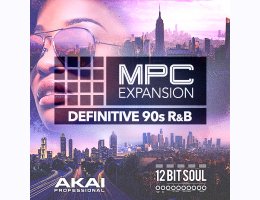 90s R&B represents the rapid rise from genre music to mainstream cultural and commercial dominance over this transformative decade. Forever intertwined with the sounds of Rap/Hip-Hop, there isn’t one pervasive sound that defined the era, but more so an emphasis on eclectic style blending.

A rapid parallel evolution in artistry and music technology ensued in a short period of time, propelling us on a journey from the organic dusty breaks of Golden Era Hip-Hop to New Jack Swing to iconoclasts like Sade coupled with the meteoric rise of the Dirty South, retrofitted Neo Soul stylings, and the arrival of the Shiny Suit Era, where Hip-Hop moguls and superstar divas were born. This expansion captures that moment in time as R&B continued its progression alongside Hip-Hop.

- 40 kits featuring 100+ 90s inspired composition loops and well over 500 one-shots sampling sounds and gear of that era: horns, piano, organ, keys, strings, synths, live bass, guitar, and dusty vinyl & crisp digital drums to represent the fast-evolving sound of the decade. All sounds created and processed with an extensive collection of analog and digital gear, including popular instruments and samplers from the 90s era.