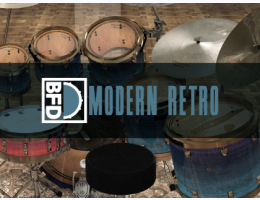 BFD Modern Retro is an expansion pack for BFD3, BFD Eco and BFD2 with a pair of kits that helped define the sound of the 90s and early 2000s.

Produced and recorded by Chocolate Audio (the team behind BFD Imperial Drums), the pack combines extreme levels of detail with varied mic channels and beater types to provide a set of remarkably expressive drums with a wide timbral range.

The 70 included instruments include 1997 Sonor Designer and late 90s Tama Starclassic kits, Ludwig, Sonor and Tama snares and a suite of cymbals and hihats by Zildjian, Ufip, Paiste, Turkish and Sabian. Many sounds feature hotrod or brush versions while kicks are provided in plastic and felt beater versions and recorded with 4 direct mics! The lush ambience of the recording space is captured with 2 sets of overhead and room mics.

BFD Modern Retro comes with mix-ready presets designed to offer a variety of pop/rock-oriented sounds although the pack is perfect for all modern genres that demand detailed, focused and powerful-sounding drums.