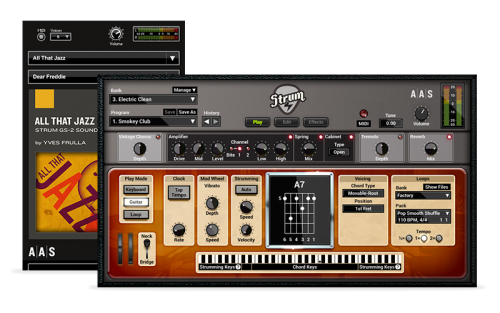 With this Strum GS-2 sound pack — All That Jazz — sound designer Yves Frulla pays tribute to some of the jazz guitar greats. All that Jazz packs 12 styles, 84 guitar presets, and 84 strumming patterns playable with your own chord progressions.

By combining Strum GS-2's Guitar, Keyboard, and Loop modes along with preset variations, your jazzy guitar parts are covered. The All That Jazz sound pack showcases jazz' foundations with its up-tempo funky strumming pattern rhythms. Give it a try on your next hip jazz combo charts or your complex swinging big band arrangements.

Canadian musician Yves Frulla is an internationally acclaimed songwriter, producer, and keyboardist. Mostly known worldwide as Celine Dion’s keyboard player. He runs his own project studio in Sin City. Between world tours and countless sold out shows, he recorded three live albums with Celine Dion and appeared with her on many television shows, including David Letterman, Jay Leno, Arsenio Hall, and Oprah Winfrey.

Only compatible as a standalone with Strum GS-2 and the free AAS Player. 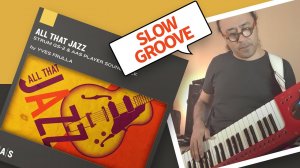 Thiago Pinheiro jams with the All That Jazz sound pack

00:01:53 by Applied Acoustics Systems Jul 28, 2021
Thiago Pinheiro gave the "All That Jazz" sound pack a little spin and came out with this pretty cool groovy track. We hope you'll enjoy it! 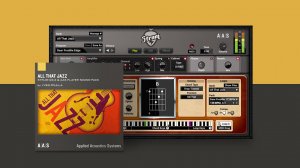 AAS All That Jazz Presentation

00:00:46 by Applied Acoustics Systems Jul 20, 2021
Here is a short video showing off the many features of "All that Jazz". It includes 12 styles, 84 guitar presets, and 84 strumming patterns playable with your own chord progressions.