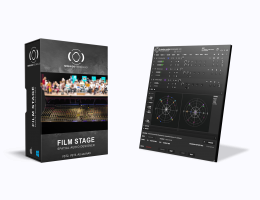 Using an advanced virtual bus system, the Spatial Audio Designer (SAD) allows for the mixing and monitoring of any immersive format in all digital audio workstations (DAWs) and many video workstations.

Formats like 5.1, 7.1, Dolby Atmos 7.1.2 to 9.1.6, AURO-3D, MPEG-H, IMAX 3D and 22.2 are just a mouse-click away with the SAD. Use it to create and export multi-format mixes for custom configurations such as those in planetariums or other installations.

In addition, you’ll see that the SAD can use existing panning and volume automation data. This means that existing multi-channel 5.1 mix sessions are just minutes away from a discrete 7.1 mix – and then of evolving to a 3D audio mix for home, cinema, 360/VR or mobile entertainment applications.

The SAD is also the only tool in the market for authoring, mixing, monitoring, exporting and encoding all MPEG-H formats, including those compatible with Sony 360 Reality Audio.

The binaural virtual loudspeaker processing capabilites of the SAD is based on real studio measurements as well as unechoed chambers and allows for any type of format to be mixed with just regular headphones if no appropriate loudspeaker system is available.

The SAD is also the perfect tool for the straightforward production of breathtaking binaural audio mixes.

The In-One version is a plug-in geared towards monitoring needs, giving users the binaural headphone virtualization capabilities required for these purposes instantly. If you want to create rather than simply monitor, you’ll likely want to have a Virtual Producer or more expansive licenses, as the SAD In-One Plug-in does not support MPEG-H creation.