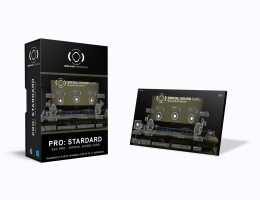 Maximum of 8 input channels for up to 7.1 surround; binaural/stereo output; 2 seats

This version of SSC offers inputs for audio systems up to 7.1, including DAW outputs, games, and DVD or media players such as VLC, Youtube, and NETFLIX. Offers full access to professional features.

The Spatial Sound Card (SSC) Pro is a software-based, virtual sound card. Professional monitoring of audio content usually requires complex, high-quality speaker installations, for which both budget and space are needed. The Spatial Sound Card Pro enables monitoring of stereo and surround up to 7.1 using binaural loudspeaker virtualizations with regular headphones on the computer.

It works as the standard audio device on a computer and will receive audio files automatically. It offers more than 70 binaural room virtualizations from a constantly growing number of high-end studios and dub stages like ARRI Stage One, MSM Munich and many others. The technology featured in the SSC Pro has been used for major Blu-ray releases such as The Expendables I-III, The Fifth Element, and Kraftwerk 3D.

To optimize virtualization, the SSC Pro offers sensitive parameters for individualization. This includes the ability to customize the frequency curve of whatever headphones are used. Presets for a lot of well-known headphone models are also included.

The SSC Pro doesn’t do “upmixing” or fake-surround processing; instead, it provides a natural and emotionally stimulating listening experience in stereo or surround sound with very precise positional audio reproduction.

The SSC Pro works with all computer applications that support up to 7.1 audio output, including media players like VLC and FLAC as well as video/audio workstations, games, and 360/VR applications.

The SSC Pro is recommended for use by media professionals working in the audio, music, 360/VR, video, gaming, and/or multimedia sectors as well as any other fields that need workstations equipped with high-quality audio monitoring capabilities.