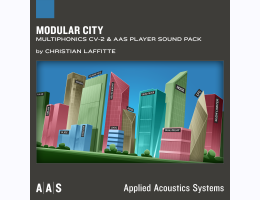 Giving a bold and exuberant spin to Multiphonics in a big way with frantic high-gain distorted sounds, fun plucks, hypnotic arps, intriguing flutes, and lots of detailed textures—riding the line between acoustic and synthetic tonalities.

Enhance your recordings with powerful macros carefully routed to add character and dynamism to your performance. Modular City can inject charisma and vigor to your productions with its fresh take on modular synthesizers.

Who’s Christian Laffitte?
Christian Laffitte is a French musician and sound designer based in the South of France. He has been developing sounds for Dream, Arturia, Zoom, Applied Acoustics Systems, M-Audio, Avid to name a few. He also composed music for Sony video games trailers and for French TV channels and radio stations. As a keyboard player with a great interest in synthesis and new technologies, Christian Laffitte has put all his passion in music and sounds in the creation of Wejaam: a free music sequencer for smartphones and tablets.