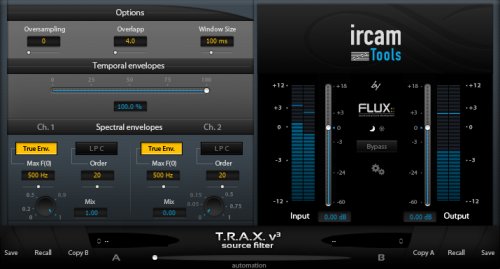 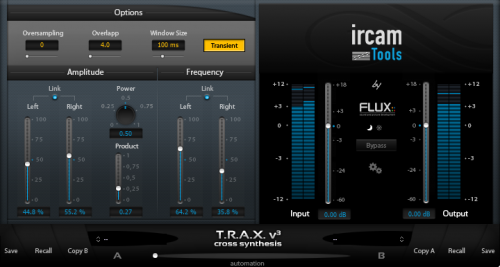 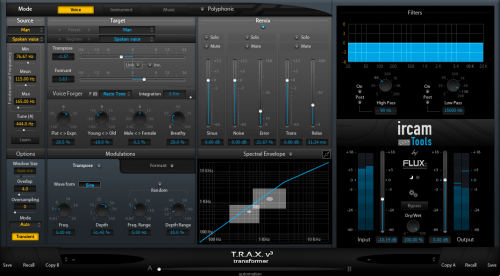 The Next Generation Voice and Sonic Processing Tools

A suite of three processors developed over the years by the sound analysis/synthesis team at IRCAM. Their goal was to provide users with signal transformation algorithms that allow altering of sound characteristics (pitch, timbre and duration) with intuitive high level controls.

• TRAX Transformer V3 based on an augmented phase vocoder technology and a cutting edge transformation algorithm,

• TRAX Cross Synthesis V3 which uses a phase vocoder (the amplitude and the frequency/phase spectra), to morph the spectral characteristics of two sounds,

• and TRAX Source Filter V3 based on a signal model decomposing the signal into a time envelope allowing transformations that extend well beyond the more common source filter morphing effect.

TRAX Transformer v3 is based on an augmented phase vocoder technology and a cutting edge transformation algorithm, allowing for manipulating characteristic properties of a voice such as gender, age and breath, and on any other sound; expression, formant and pitch.

TRAX Cross Synthesis v3 utilizes a phase vocoder (the amplitude and the frequency/phase spectra), to morph the spectral characteristics of two sounds. The amplitude and frequency/phase spectra can be blended continuously and since the features that are used here are strongly nonlinear, the sound morphing is nonlinear as well, offering a way to create a wide range of new exciting and unusual sound effects. 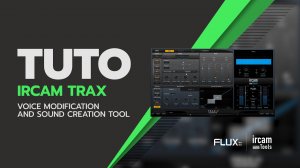